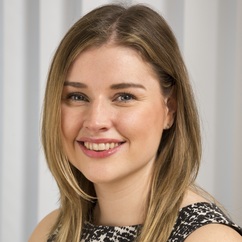 Rachael joined the firm in September 2016 as a trainee Solicitor after graduating from the University of Dundee with a first class honours degree and a diploma in legal practice. Rachael is also a Notary Public.

Rachael has been admitted as a full member of the Society of Trust and Estate Practitioners after being awarded the STEP Diploma for Scotland (Trusts and Estates) with Distinction in 2020.

Rachael undertook a private client focussed traineeship and advises on all aspects of estate and succession planning including Wills, Trusts and Inheritance Tax planning. Rachael also has a growing interest in Mental Health and Incapacity Law and advises families of incapacitated adults through the complex process of obtaining a guardianship.

Rachael was part of Blackadders Dragons’ Glen team to raise money for Children 1st. The team raised over £5,000. Rachael is also involved in fundraising for PAMIS, having taken part in their “Challenge 25” to raise £1000 for the charity.