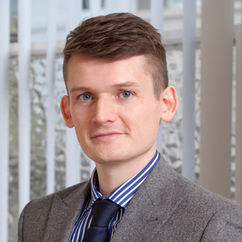 Ryan is a Legal 500 Recommended Lawyer and leads Blackadders’ Dispute Resolution team. He has been described in a recent edition of the Legal 500 as an “excellent litigator” and as having an “attention to detail on niche legal matters [which] sets him out from his peers”.  Ryan and his team are involved in all matters of a contentious nature, with Ryan having a particular focus on property litigation, restructuring & insolvency, commercial disputes, contentious private client matters and debt recovery.

In addition to traditional litigation, Ryan also has experience of alternative forms of dispute resolution, including Arbitration, Mediation and Early Neutral Evaluation.

Ryan has a keen interest in the law of insolvency and is regularly instructed to act on behalf of liquidators, administrators, trustees and those subjects to insolvency proceedings. As regard his property litigation practice, Ryan specialises in lease enforcement matters, dilapidation claims and agricultural disputes.

Ryan is dual-qualified in Scotland, England & Wales (although he only holds a practising certificate in Scotland).

Call Us Or Request A Call back
Copyright 2017 - 2020 Blackadders all rights reserved
Responsive Website Design , Development & Hosting by mtc.